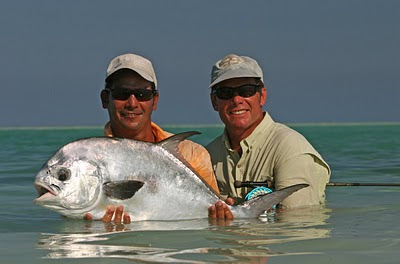 The Cuba Grand Slam Series started in Issue #13 and featured bonefish. In Issue #14 we continued the series with permit. The guides who work for Avalon at Tortuga, Cayo Largo and on the motherships see permit everyday. I had the great fortune to be on the water 20 days, in the making of the Grand Slam Series. Bonefishing was great, as was the tarpon fishing, but it was permit that really gave the guides a chance to show their stuff. 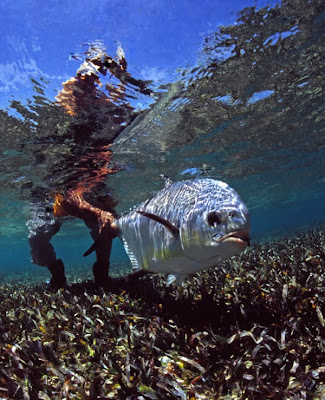 I made mental notes while fishing with these great guides. Here are a couple that everyone should remember -

1. On clean, sand flats, which are usually fairly deep, around 5 to 6 feet deep, your fly needs to sink to the fishes level. So, there are two ways to get it there. One, is to use a very long tippet so that the fly has less resistance while sinking. A tapered leader gets fatter and the added diameter slows the sink rate down. I know trout anglers who do the same thing with nymphs. The second way, is to lead the fish by 15 feet and give your fly some time to sink. I have always liked a fly coming off the bottom for permit. It pulls a little sand or marl with it and looks even more realistic. 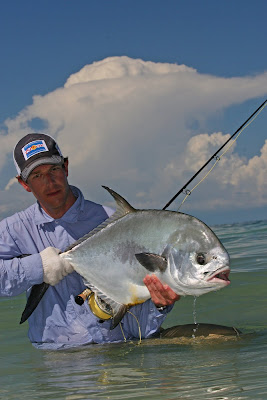 2. On flats with a lot of coral, sea fans and other potential hazards, a knot-less leader can save the day. Many times a hooked permit will be lost in the coral, but it is not always from being cut on the obstructions. Many times permit run through coral, just like a bonefish through the mangrove. The leader and line follow the fish on this nerve-wracking journey. Often the tippet knot or butt section knot hangs up on something and the fish breaks off. The line was not cut, it snapped because of knots in the leader. Try long knot-less leaders and make a smooth connection at your nail knot by covering the knot with a soft epoxy. 3. Permit seem to bite better when the angler is farther away from the fish. I have seen many fish, in schools tailing, feeding and acting what guides call 'happy'. As the boat gets closer than 75 feet, they become slightly less happy and when the boat gets closer than 50 feet, your odds of a hook up are greatly affected. When permit are cruising toward the boat, they can be had at close range, but tailers in calm water do not like hearing boat slap, noises in the boat, etc. Here the cast is king. A solid double haul, smooth and calculated at a distance of 80 feet will get many more fish to eat and that really makes the guides day easier. 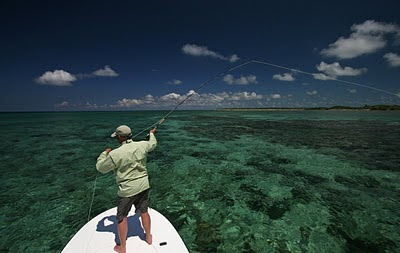 4. When fishing in foreign countries where language is an issue, try a couple drills to get everyone on the same wavelength. I like to spot a dark spot on the bottom, or a mangrove shoot, or a sting ray and ask the guide how far he thinks it is. If he is just OK with my language, I know he knows some words better than others and he might say 40 feet because it is easier than saying 65. After a couple trial and error distance sessions, I have a good idea what his distance communication habits are. When distance and 'the clock' are vital in making a good first cast, knowing his habits are useful. Also, throw some line and say to your guide, "OK, this is my best cast." He will then know what your distance limitations are and use that information to position you accordingly. If he knows you max out at 55 feet, he will use that in his strategy. If you rock a cast of 85 feet, as a demo, he will smile and say something nice!! 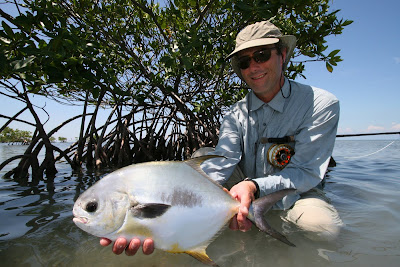 5. Last but not least is to stay calm. I have seen many anglers cast a sweet loop, smooth and with some nice distance, only to freak out when they see a nice permit and their casting goes crazy. Instead of that smooth loop, they rush and get jerky and the line and fly fall short, again and again. Just breath, think and stay calm. Sometimes the guides put too much pressure on the angler and when you tense up, the fly will wrap around the poling pole, or hit the motor, or dump in a pile. Stay loose, stay in YOUR zone, fish with your instincts. Brian O.
Posted by CATCH MAGAZINE at 7:31 PM

There are many interesting here. Hope to see some more in future

Great tips, all the more because they're from someone with so much time on the water and knows what to look for. Permit are that enigma that puts all other fishing tactics to shame. The first one I ever caught grabbed my 2nd fly change after I'd followed the school a couple hundred yards down the beach. If I had to guess I'd say that fish was maybe 25 feet away when I hooked up. I thought, "Hey, these fish aren't so bad."

Then I fished the Keys and would watch them just dematerialize like 50 feet out, but that was all skiff fishing. I think this must be why so many folks like target permit on foot. Do they get out of the skiff for permit in Cuba?