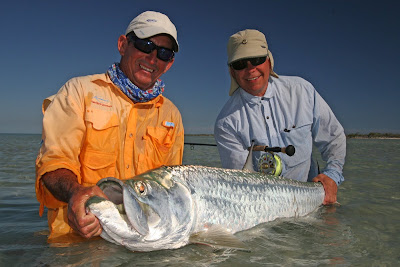 The guides in Cuba, that I have fished with, have several simple, helpful hints for their anglers and tarpon fishermen anywhere in the world. They have the benefit of having a lot of fish to cast at and a lot of unpressured fish that eat flies with mucho enthusiasm. Here is a list of tips from a couple great Avalon guides.

1. Casting. Yes, that common suggestion from all guides, trout/steelhead/flats, everywhere. In the case of a tarpon guide, he would like to have anglers with moderate casting skills to practice, and to practice with a 12 weight. You might be using a 10 weight in Cuba, but after some practice with a heavier rod, the 10 feels light and easy to cast. The double haul is a must. Learn to shoot line on your back cast. That can really help deliver the fly with some distance in only a couple false casts. Practicing on windy days might be a trip saver, also.

Posture. Cuba guides like anglers to finish their cast and take an athletic stance as they start the strip. Right handed anglers would cast in a throwing stance, with the left foot forward and the right foot at least two feet behind the left foot. This body position allows the angler to lean forward during the strip and after the strike, they can stand up and lean back tightening the line while initiating the strip strike. It is a very powerful combination. Buy leaning forward, with the rod slightly extended, it makes doing a 'trout' strike harder to do, also. 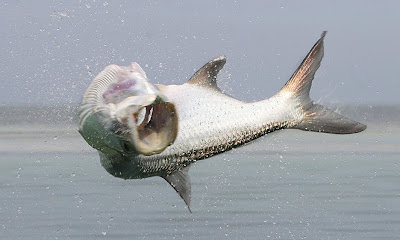 Strip Strike. You have it, or you don't. A coordinated strip strike comes with experience. A good way to get a strip strike that the guide will not critique is easy. Go out on your lawn with another person and cast a line out 60 feet. Have the helper stand at 40 feet with his or her foot on the fly line. The caster gets into the 'athletic stance', leans forward and starts to strip the line in. The helper then steps down on the line and the caster straightens up and with the rod pointing straight at the the helpers foot, uses the line hand to grab the lane hard and pull back. I like to think that the strip strike is like having a hand line, the rod does very little but stay straight, pointing at the tarpons mouth. Let the fish turn, keep the line tight, breath, stay loose, then get ready to clear line. In the skiff, the other angler should not be taking photos and talking until he assists the angler with loose line. When the fish is on the reel, whoop it up.

Fighting. Try to fight a tarpon with the lower three feet of your rod. The mid section and tip are for casting, the butt is for fighting. You should even be able to feel the rod bend in the cork. Keep as much pressure on the fish and listen to the guide. When it is time to land the fish, get some distance between you and the guide. If you are too close the rod will be very stressed and will often break at the last second. Don't rush the fish, even though you are tired, get the leader in the guides hand and as soon as he grabs it get slack in your line so if the fly pops out it won't hook the guide. I like to unhook, revive and release tarpon outside the boat in shallow water, if possible. Tarpon inside the boat can be hard on the fish. 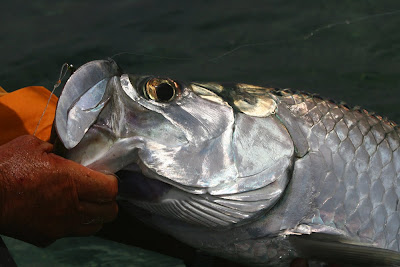 Small Tarpon. Baby tarpon are a blast and are a good fish to get these skills honed before big or giant tarpon are sought. Ask your guide about small tarpon if you want to have him help you with casting, strip striking, etc. It is all good.
Posted by CATCH MAGAZINE at 8:25 AM

A great set of tips from a master. I wish I had read these before my Cuban trip last year - they would have been invaluable.

Very helpful tips. All tips about any type of salt-water fly fishing seem to contain the "practice,
practice,practice" advice.