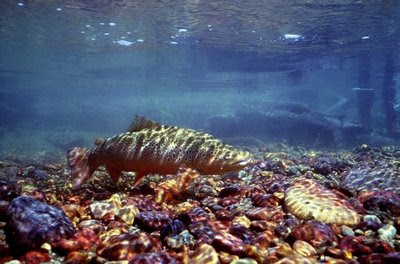 People often are reluctant to make the trip to Chile because of the
long flight. It really is not that bad. On the LAN Airlines flights
from LA to Santiago, via Lima, Peru, every seat has a video screen
with options for movies, games and TV. I watched 4 movies, back to
back and the 8 hours to Lima literally flew by. There was an
independent film category that was very good.

In Santiago, Chile, the Scientific Anglers distributor, Marc Whitaker
organized a nice Catch Magazine event at his fly shop, the Rod & Gun.
Catered food and fantastic Chilean wines were served while I did a
Power Point presentation. I was followed by my good friend Filippo, a
co-owner of Avalon, the big lodge operation in Cuba, who did a nice
presentation on their 8 lodge operation. We had a good crowd of local
anglers, even though almost everyone in Santiago was at the Madonna
concert.

From Santiago, I flew to southern Chile and am now in Cinco Rios
Lodge on the Simpson River. The weather is perfect as we plan for a
week of organized wilderness fishing. We will be hiking and going on
horseback into some very remote areas. This region is the size of
Montana with only 60,000 people and arguably the best fishing scenery
in the world. We heard rumors of a watershed that has 30 inch
browns...more later.

Posted by CATCH MAGAZINE at 2:29 AM